Crazy lines on a beautiful day can lead to the perfect Saturday. Shutting down one of the most popular parts of Pennsylvania Avenue (in front of the Newseum) in DC for a BBQ Battle was one of the best experiences I’ve ever had. I’ve only participated in an event loosely similar to this one other time in the District, which was the annual Taste of DC event.

My mom told my sisters and me about Giant’s annual BBQ Battle, and I just had to go. A reasonably priced event with good food? Count. me. in. The line to get in wasn’t really a line. It was a mass of people moving to pay to get in or pick up tickets. I wish this was more organized, but at least it didn’t affect how quickly people got in!

As soon as we got in, we saw several stations lined up. Some stations only had food and others were media-related. Most, if not all, of the stations inside were free. No strings attached. 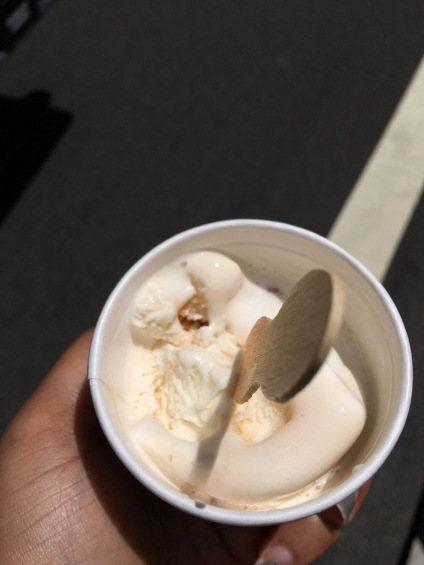 The Oscar Meyer hot dog car was there. At their station, they had a game that required you to throw small sandbags into three different holes in a cardboard *thing*. If you got a bag in all three, you won a coupon. My mom won, and my sister and I had a photo opp in front of the hot dog car! 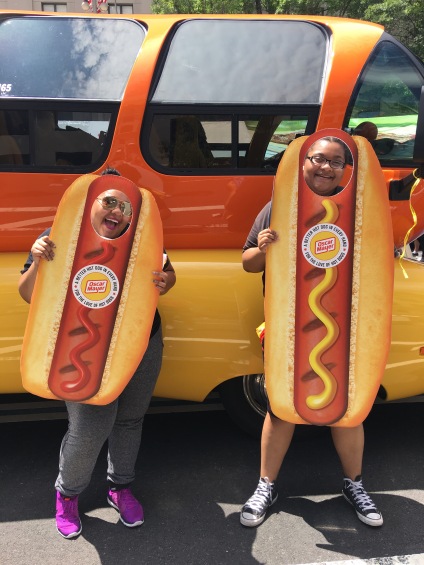 The biggest BBQ tent had a super long line, so we decided to see what else the event had to offer before committing so much to such a line. There were so many places to get free food. Giant (Stop n’ Shop, depending on where you are in the U.S.) sells most of this food in their stores. We got to try some Naked juices, Yungeling ice cream (churro), and some of their food products barbecued. The Apple Butter pulled pork was scrumptious.

The Nature’s Promise truck allowed each person to choose one free item from the shelves inside. I chose their Thousand Island dressing, which I finally tried the day before writing this. It’s decent, but I think it tastes eggy.

One of the guys at the Haagen-Dazs station was basically giving away ice cream. The station had two of the company’s flavors: Pineapple Coconut and Mint Chip. My mom only wanted one, and he was being pushy and trying to give her another one. I took two. He got my sister to take three. ‘Twas interesting.

There were a couple of tents that let people 21+ try alcoholic beverages. My mom and I went to one that didn’t have a name but offered two different wine brands and the Barefoot Wine station. We both tried one of Steila Rose’s sweet red wines, which was honestly the best red wine I’ve ever had. I love a good sweet, red wine. Barefoot was sampling four different flavors of their spritzers, and I chose the Moscato Spritzer that has “flavors of peach and tangerine,” according to their website. I loved it but wished it was a little more peachy.

There was a BBQ tent that had a shorter line: the military BBQ Battle. I was glad that I finally got to sample some food from what the event was centered around! All of the U.S. military branches were represented and had to incorporate chicken in their dishes. I think the Army and the Navy had the best dishes, packed with tons of flavor. Unfortunately, I didn’t get to take pictures because I was juggling plates.

This was our first time attending Giant’s BBQ Battle, and I enjoyed my time trying a lot of good food and drinks and enjoying the weather. I’m looking forward to the next one.